Mr. Kaiser started dancing when he was four years old. He is one of five brothers that made up a professional tap dancing group. The “Kaiser Brothers” grew up outside of Seattle and toured the United States throughout their childhood. Mr. Kaiser began his professional ballet career at age sixteen with Pennsylvania Ballet under the Direction of Barbara Weisberger. Mr. Kaiser returned to Seattle and joined Pacific Northwest Ballet under the direction of Kent Stowell and Francia Russell. For fifteen years he performed a wide range of repertoire. Mr. Kaiser danced roles from world-renowned choreographers including George Balanchine, Jerome Robbins, Paul Taylor, Kent Stowell, Marius Petipa, Anthony Tudor, Lar Lubovich and Glen Tetley. Mr. Kaiser danced a very diverse repertoire from Paul Taylor’s “Company B” to George Balanchine’s “A Midsummer Night’s Dream” Divertissement Pas De Deux, George Balanchine’s “Serenade” to almost every male role in Kent Stowell’s “Nutcracker” from the Prince to Drosselmeyer. In addition Mr. Kaiser enjoyed dancing Anthony Tudors “Jardin Aux Lilac”, Mercutio in Kent Stowell’s “Romeo and Juliet” and Glen Tetley’s “Voluntaries.”

After retiring, Mr. Kaiser was appointed Ballet Master with Oregon Ballet Theatre and later promoted to Associate Artistic Director under the direction of James Canfield. While at the Oregon Ballet Theatre Mr. Kaiser staged works choreographed by James Canfield, George Balanchine, Donald Byrd, Robert Joffrey, David Parsons and Val Caniparoli. Mr. Kaiser has an extensive teaching background throughout the United States that includes Pacific Northwest Ballet, Pennsylvania Ballet, Oregon Ballet Theatre, Dance Educators of America, Tulsa Ballet and many more. Mr. Kaiser’s ties to the ballet world can be felt throughout the United States. His older brother Roy Kaiser, was the Artistic Director of Pennsylvania Ballet in Philadelphia for over twenty years. His younger brother Russell danced with New York City Ballet and is now Assistant Artistic Director for Boston Ballet. Ken and Dan Kaiser are both Artistic Directors of ballet schools and regional companies.

Mr Kaiser enjoys bringing in guest faculty such as Lindsi Dec, Jonathan Porretta, James Moore, Jerome and Laura Tisserand and others from throughout the country to allow students a broader outlook on dance. Mr. Kaiser believes anyone who wants to learn dance should have the opportunity to do so. Mr. Kaiser is excited to bring his years of dedication and experience in the field of dance to IDT and this rapidly growing area of the Northwest.

Danielle received her BFA degree from the University of Hartford, during which she performed at the Kennedy Center as a soloist. Danielle trained in NYC at The Alvin Ailey School and The Limon Institute and worked professionally in New York with Rebecca Kelly Ballet, Mary Seidman and Dancers, Mimi Garrard Dance Company, and danced in a project at Grand Central Station. After moving to Seattle, she worked with Spectrum Dance Theater; in which she performed in PNB’s Celebrate Seattle Festival and the Spoleto Festival in Italy. Danielle appeared as a “Shark girl” in the 5th Avenue Theater’s production of West Side Story and danced with Seattle Opera’s production of The Pearl Fisher’s. Danielle danced with DASSdance in Festivals including the D.U.M.B.O Dance Festival and Dance Now Festival in NYC. Danielle is in her 7th season with IDT.

Hailey Watters was born and raised in Seattle and has been studying dance for most of her life. She has had the opportunity to train, perform, and travel all around the United States honing her craft. Hailey studied at Marymount Manhattan College in New York City for two years and went on to receive her B.A. in Creative Studies with a concentration in Dance from the University of Washington. Go Dawgs! She has interned at the The John F. Kennedy Center in the “Performing Arts for Everyone”/Millennium Stage department in Washington D.C. where she assisted in the production of a host of multidisciplinary performances. She also had the pleasure of interning at Dance/USA where she helped plan their 2015 Annual Conference in Miami, FL. She is a firm believer in the arts connecting communities and advocates for all children having access to the arts. Hailey will be starting her 7th season with IDT!

Shannon comes from Salt Lake City, Utah and has studied dance since the age of 5. Her earliest memories are of moving and being consumed with all things dance! She has trained in Korean folk dance, Ballet, Pointe, Jazz, Tap, Hip Hop, and Modern Dance. She danced competitively both regionally and nationally and was a two time Tremaine Dance Convention Scholarship recipient. She also had the opportunity to study at the EDGE Dance studio, Performing Dance Center, Broadway Dance Center, Steps on Broadway, Dance New Amsterdam, The Joffrey ballet School, Parson’s Dance Company Summer Program, American Dance Festival, and The School at Jacob’s Pillow. Mrs. Adams graduated Cum Laude in 2004 from the University of Utah with a BFA in Modern Dance. Shannon has a great love and passion for teaching and choreographing for her students at Issaquah Dance Theatre. She loves teaching all levels and ages and loves seeing the growth and artistry in all of her students.

Emmy teaches compassion, creativity, and communication through the art of dance. She has professionally performed and taught ballet, pointe, jazz, lyrical, contemporary, salsa, partnering, and hip hop for the past ten years across the USA and Kenya, focusing on dance as a tool to break down barriers and build communities. ​Emmy is the Program Director at Arts with a Purpose. This program utilizes dance, art, music, and creative writing to build meaningful relationships; empowering trauma-impacted youth to develop tools which foster a healthy, productive future. Emmy has experienced first-hand the life changing effects of dance, and her gratitude shines brightly in her teaching style. Emmy is in her 7th season with IDT.

Hayley is from the Pacific Northwest and started her dance training at age 5 with Bremerton Dance Center. She joined BDC’s partner pre professional company Peninsula Dance Theatre from 2002- 2018 and performed in many principal roles. Being part of Regional Dance America/ Pacific, Hayley had the pleasure of performing and taking master classes at many festivals held around the U.S. She has taught various dance styles including Ballet, Modern, Contemporary, and Jazz to all ages over the last 10 years. She has choreographed for various shows as well. Hayley started her own dancewear line in 2021 and is an advocate for anyone who wants to dance (every body is a dance body). She is happy to start her second season with IDT.

Holly Logan Livingston is a choreographer, dancer, and dance educator in the Seattle area. She studied ballet under Elena Dominguez-Bartley, Luis Dominguez, and Nancy Dominguez-Cole at the Performing Arts School of Metropolitan Toledo. At PAMT she also trained in Jazz (Giordano based), Tap, and also extensive training in Musical Theatre. Mrs. Logan went on to graduate Magna Cum Laude from Kent State University with a BFA in Dance Performance & Choreography with a minor in Theatre, where her studies not only included daily technique classes but also in dance composition, dance pedagogy, as well as dance mechanics and anatomy. Since her graduation in 2009 Holly has worked as a performer with companies such as Verlezza Dance (Cleveland Ohio) and here in Seattle with Sixth Day Dance as a performer, choreographer and instructor. Holly is also the Artistic Director and founder of a professional company in Seattle called Intrepedis. Holly is excited to start her second year at IDT!

Kirsten started her dance career at the age of 10 where she was a competitive drill team dancer. She later became a competitive cheerleader and a Level 5 gymnast. She has performed in a singing, drama and dance touring group and has been the creator and choreographer for her own hip-hop company for children. She has coached gymnastics as well as cheer at Cascade Elite Gymnastics. She was a co- head coach for Roosevelt High School Cheer Squad focusing on tumbling and stunting.  For the past 5 years she has been a hip-hop instructor at Woodinville Dance Academy and in the past 4 years has created and grown the Acro program there. Kirsten has a very big passion for dance as well as working with children and is excited to be at IDT!

As co-director of AnA Collaborations, she has produced a range of over 25 dance works including award-winning dance films, immersive theater productions, music videos, and performances alongside grammy-award winning saxophonist, Johnny Butler. Audrey has been a dance educator over a span of 12 years leading classes and mentoring in a variety range of styles at Gibney Dance and Peridance Capezio, the All Stars Project, The Creative Dance Center, and Ballard Academy of Music and Dance. This will be her first season with Issaquah Dance Theatre.

Chantelle was born in Seattle and has been training in hip hop for over 12 years. She has been dancing as a solo artist as well as performing on teams in the greater Seattle area. Chantelle has competed in several competitions including Monsters A-List, has received multiple awards, and has had the pleasure of dancing in a movie filmed in Seattle called "Two Countries”. Chantelle has also had the the pleasure to choreograph and perform in dance in various music videos.

Chantelle wants to provide her students with choreography and movement that will help them grow and progress their skills. She is continuously learning from her students and can't wait to start teaching at IDT!

Caitlin grew up dancing and performing in the Pacific Northwest, primarily in Everett and Seattle. She received her BA in Dance and in Sociology from Western Washington University in 2019, where she studied under Pam Kuntz, Cher Carnell, and Susan Haines. In her time there she performed at and choreographed for the American College Dance Festival's annual conferences. She has performed in Seattle Theatre Group's 'DANCE This,' performed with The Provocateurs, with Forthun + Rome Dance Theatre, and collaborated with Kuntz & Company productions. In Bellingham she taught at Unique Technique Dance Studio and Opus Performing Arts. Caitlin has been a performing member of Intrepidus Dance for six seasons and counting. She is thrilled to be joining IDT this year!

Dakota Wear was born and raised in Seattle, WA. She started dancing at the age of 9 at Spectrum Dance Theater training in ballet, contemporary, lyrical, jazz and tap. She had the pleasure to train in various summer intensives such as ABT, PNB, Hubbard Street Dance Chicago, Alonzo King LINES and The Joffrey Ballet School New York. In 2014 she trained at the Cornish Preparatory Program under the direction of Steve Casteel for one season. Dakota joined The Academy at Spectrum Dance Theater in 2015 where she worked very closely with Donald Byrd. In 2018 Dakota was accepted into Alonzo King LINES Training Program. She moved to the Bay Area and trained with Alonzo King, Maurya Kerr, Christian Burns, Arturo Fernandez, and many more. Dakota is thrilled to be with IDT this season to spread her love of dance through teaching.

Tori Campbell began training at a young age. She diversified her training during her college years at The University of Minnesota. She worked alongside the Dance Department under Tina Wallum and Toni Pierce-Sands, while also becoming a part of the Twin Cities dance community. She was influenced by Hip Hope, a philanthropy based hip hop dance company under the direction of Joelle Fernandez, the breaking crew UBreak, and the contemporary dance company Breaking Boundaries, directed by Deborah Johnson. She also spent a year in Scotland dancing with and choreographing for the contemporary dance company Barrowland Ballet, while also working with the University of Stirling Dance Team performing and choreographing for their final showcase. After seeing the power of art and dance at work in these communities, she had the opportunity to create and grow her own company, F.U.S.E. Dance Collaboration. Since moving to Seattle, she has danced with Splinter Dance Company, 3rd Shift Dance, Full Tilt, and Converge Dance Festival. She is excited to start her first year at IDT. 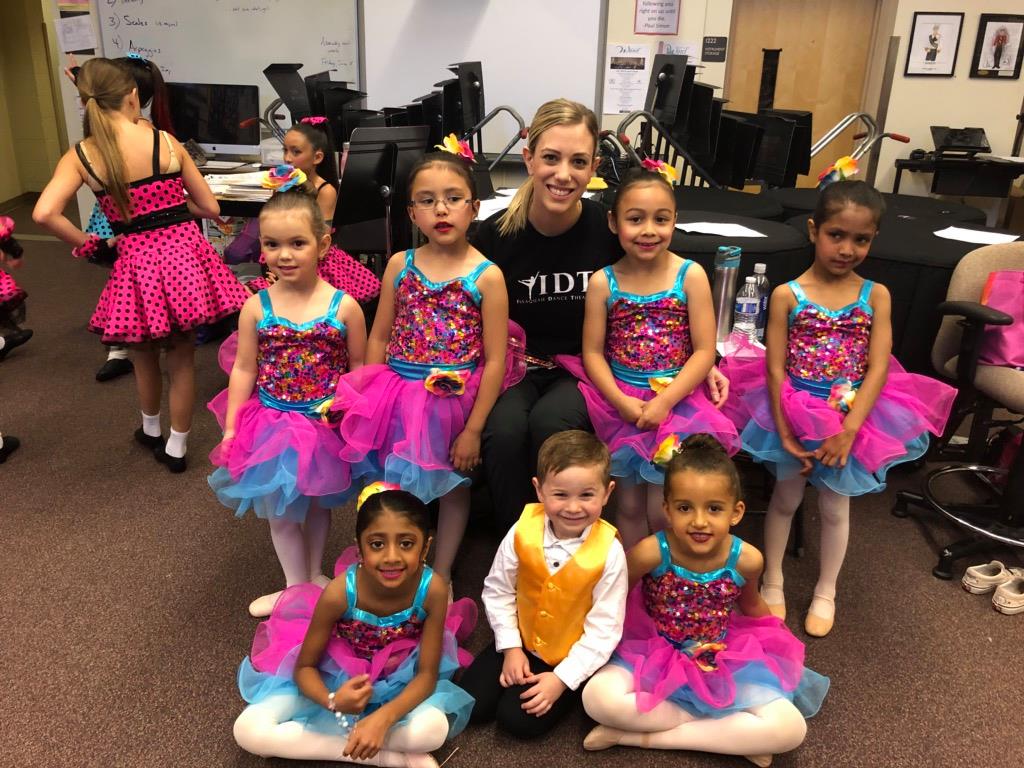